Welcome to Our Creepy School

Be prepared to be scared out of your minds. 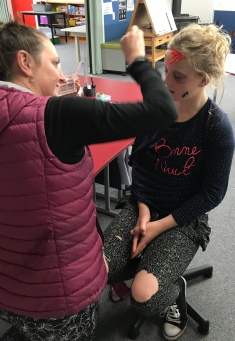 A creepy skeleton was eating people. It was eating brains. He ate 1000 brains.

On halloween there was a killer clown. Everyone was

Next minute the door opened by itself. Then the kid walked in side and said “hello.”

A clown came out the corner and blew the kid’s brains out. The clown shot him with a shotgun. The Skeleton aka Kawana

The Day of the Dead.

Most of the  children from Pukeokahu School weren’t there, when Victoria had to go to a Monster Conference. Hopefully I will not get eaten by a zombie……………..

One hour later I got bitten by a zombie……..

I turned into a zombie and went back to school. I just came when my sister bit my arm off. I tried to eat her brains for payback. I became terrified. I should have just gone back home. Zombie aka Tor

On a scary Halloween everybody was spooky. I am a killer dog. I was eyeing up everyone. But mostly Tor. I bit her arm off and now I want her foot. I want everybody’s blood to drink, except Isla because she made me. The Killer Dog aka Pippa

On the day of the dead everyone was a monster. Their bodies were gone. The monsters took over. At the school there were only the monsters left……

Everyone is out and about. It’s time to scare. All the children are out trick or treating and I am ready to scare everyone… then a little kid runs up to me and  says, “ You have a good costume,”

I said “This isn’t a costume so you better RUN.”

The little girl ran but I caught her and ate  her. Then I caught all the delicious little children and took them back to hell to eat. Mahahahaha. Skeleton aka Annie. 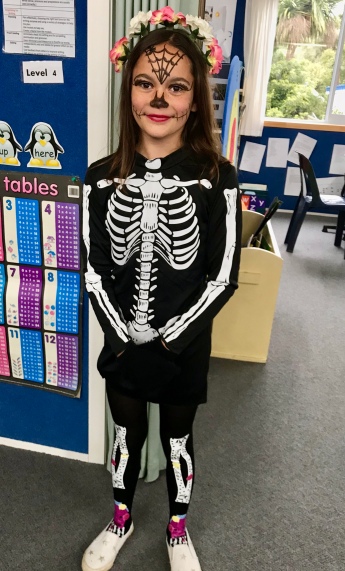 It was a creepy halloween morning in Pukeokahu. There was a bloodthirsty, scary unicorn. A visitor came and knocked on the door.

A creepy killer clown came in and said,

Suddenly the creepy killer clown ran towards the children.

The bloodthirsty, scary unicorn used her unicorn powers and blasted the killer clown away. Then the unicorn became more evil then ever and devoured the little children…. one by one.

Deep in the haunted country of Pukeokahu school, monsters and the undead are lurking in the shadows waiting for their midnight feast, so beware all visitors, there monstrosity is scary. Halloween is here and they are all ready to kill. But hiding in the deepest darkest part of the school there is a killer clown, she knows when you are sleeping, she knows when it is time to kill! She is bloodthirsty and just waiting for some little children to come so she can devour them one by one!

Written by the killer clown-aka- Isla.

Thank goodness Witchy Poo arrived to scare them off. 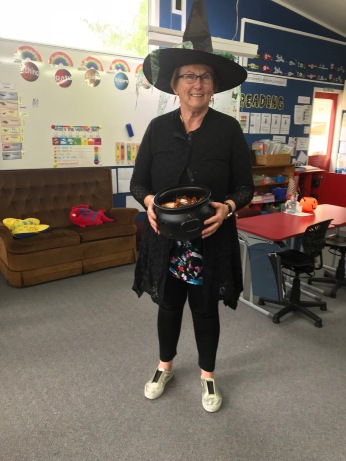 IS PUKEOKAHU SCHOOL NOW A SCHOOL FOR GHOSTS???

All photos remain the property of Pukeokahu School

View all posts by Taihape & District Historical and Museum Society