Yesterday in the afternoon we went down to River Valley Lodge. We rode four horses. I rode Rico down to the river and my friend, Tiana, led me there. Then on the way back I led her. I enjoyed riding the horse and I would like to go horse riding again.

On 29 of June Pukeokahu school went to River Valley Lodge it was amazing. My grandma’s horses were there. I rode my favorite horse  Fat Boy. We took the horses down to the river. It was so much fun. After we had finished Isla and I rode up to my grandma’s house. There were photographers there and they took lots photos of us.

On the 29 June we went to the amazing River Valley lodge to go for a ride on their horses. We lead the horses around. Bayden was on Tioni while I lead him around and then I hopped on Tioni and Bayden lead Tioni.

That was my first time hopping on a horse and leading it around. I had a great time at the Lodge.

Yesterday we went to the amazing River Valley Lodge by the awesome Rangitikei rapids. The first thing we had to do is get our black,strong helmets. After that we rode and lead the amazingly cute horses. Pippa rode Rico, I rode the famous Tioni, Keeva rode Fat Boy and Isla rode Bailey. Since I rode Tioni I thought I was famous!

Thank you to all the photographers and stable crew. 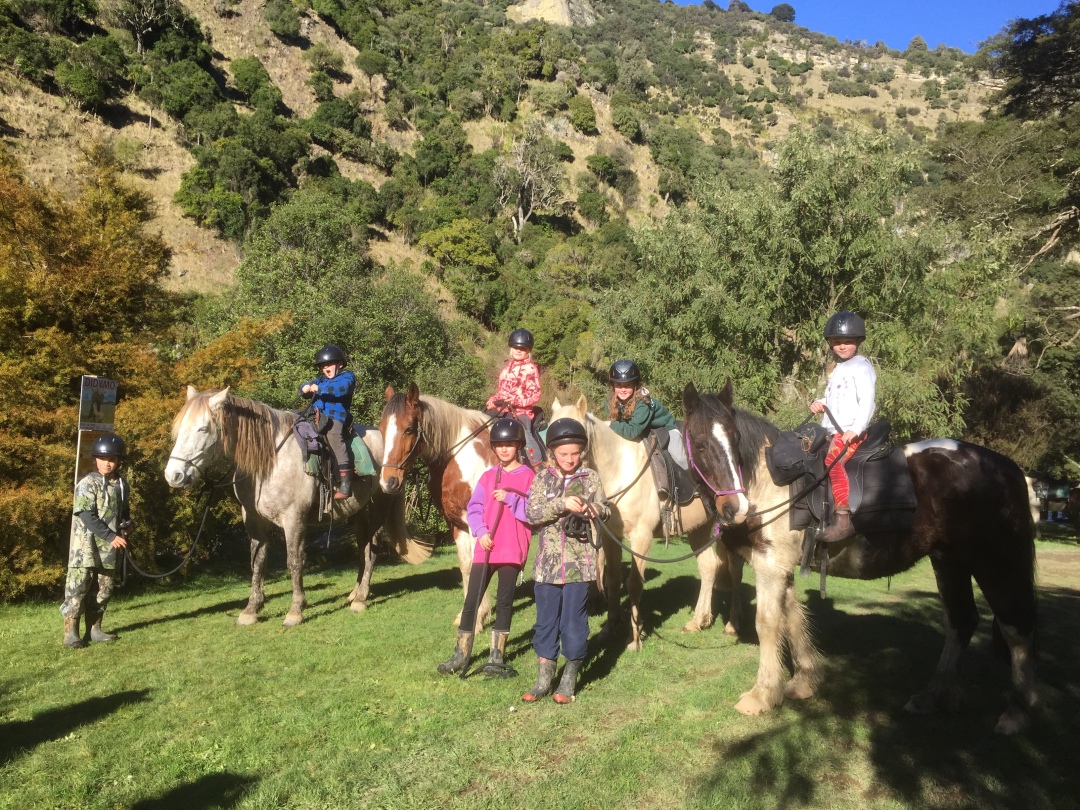 On Thursday Janey came up to Pukeokahu School in the River Valley Lodge van. We went to the stables and got Bayden, Pippa, Kawana, Tiana and Victoria a helmet. Isla and Keeva helmets are already down at River Valley Lodge. We all got in the van and Janey drove all of us to River Valley Lodge. We walked down to the horses. Janey, Kaysanne and Nicola got four horses for us. We took turns on the horses. Keeva rode Fat Boy down to the river and I rode him back up to the other horses. I felt a bit scared because I haven’t ridden many horses, but it was a lot of fun. 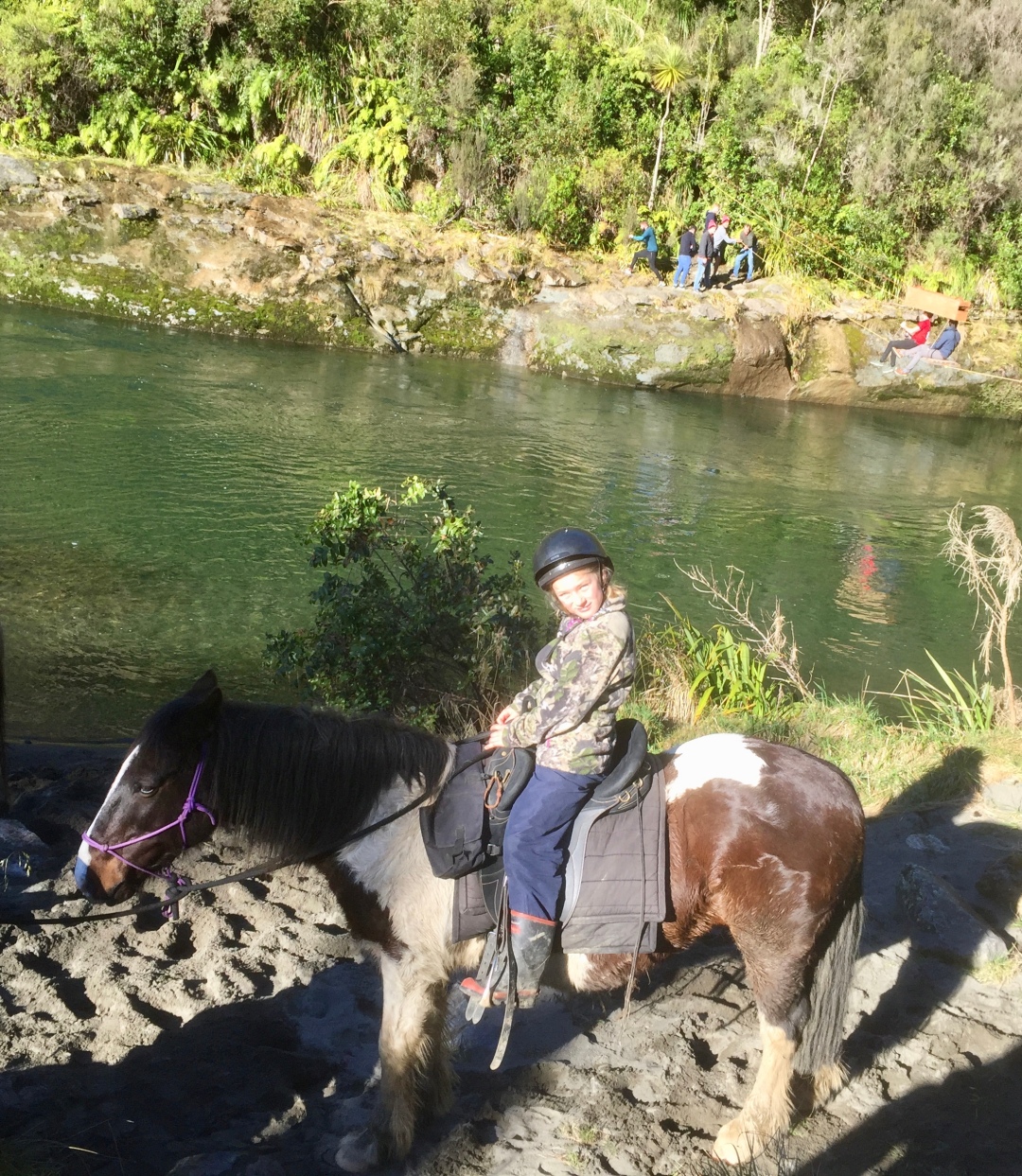 On the 29 of June we – the kids at Pukeokahu school went down to River Valley Lodge in the van. First we went to the dusty stables to pick up helmets. Then we went to the Lodge. There were about nine horses there but we only rode four of them. I rode Bailey, Pippa and Tiana rode Rico, Keeva and Tor rode Fat-boy, and Bayden and Kawana rode Tione. We took the horses down to the river. Bailey was frightened of the river and of the people going on and of the noisy flying fox. I had to hop off Bailey because he was getting way too frightened. There were photographers everywhere! It seemed like they took a zillion photos! I don’t think I will forget that horse ride. 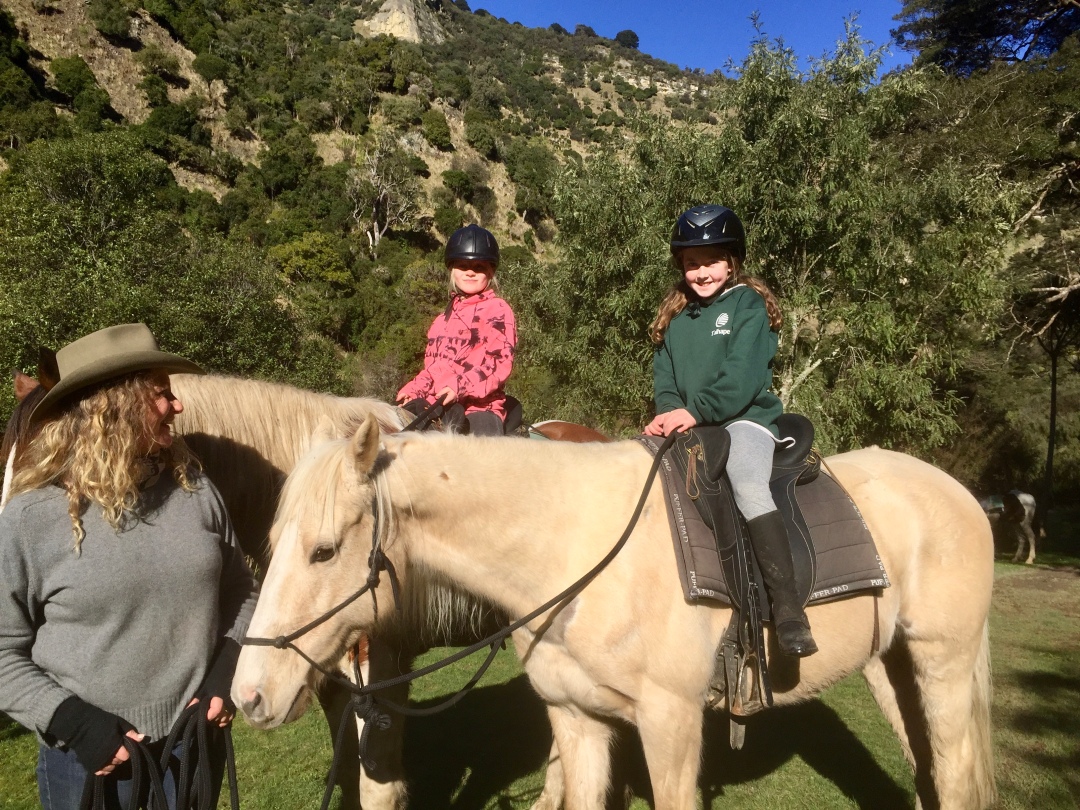 Yesterday, which was Thursday the twenty ninth of June, Isla and Keeva’s mum, Janey, came and picked up all seven of us. We stopped at the stables, and got a helmet. I said,

“Janey are we going to go horse riding?”

Once everyone had a helmet we all hopped back into the van. Janey drove us down to River Valley lodge. I saw a white horse and a creamy, cream, white horse. I could see all the horses had saddles on their backs so I said,

“ I think that we are going to ride horses,” and I was right because Nicola came out and said,

“ Ok is everyone ready to ride a horse?”

We all followed Nicola down to the horses. The first people to ride a horse were Bayden, Isla, Pippa and Keeva. Victoria, Kawana and I were the second to ride the horses. Pippa and I rode Rico, Tor and Keeva rode Fat Boy, Isla rode Bailey, and Bayden and Kawana rode Teoney. Teoney is a famous horse because, he was on tv.

I had to lead Rico down by the river.

Pippa said, “Woah, that was scary!”

Pippa hopped off and then Kaysanne had to push me up onto the horse. At River Valley Lodge, when I was on the horse, Pippa and Isla led the horse back up to where we started, Pippa said,

“ Tiana do you want me to lead the horse around the Kowhai tree?”

So we all followed Mrs Gilbert to the van and Janey hopped in and drove us all back to school. I had so much fun yesterday. Thank you to the photographers for coming to take photos.